The management of the company including its employees are recruited from special forces (Police, German Border Defence and the Armed Forces).
The members of these units are subjected to a demanding admission procedure.
It is their task to take action against terrorists and serious offenders in unusual circumstances.
Being a member of such units requires a special personality and constant further training.

Standards of training and professional skills meet the highest requirements.
The members of the special task forces are mostly put into action when all other means have failed.
All employees have experienced the  “real thing”  in the course of their professional careers.

The constant claim to update and optimize our performance is your advantage!
Our company has successfully established itself since 1997 - both nationally and internationally!

The security situation in the Federal Republic of Germany is characterized by an increasing number of violent crimes. Domestic and foreign gangs in the field of organized crime (trafficking in drugs, arms, and humans) as well as fringe groups of different political persuasions increasingly threaten Germany´s social and economic development.
The police authorities, who are responsible for safeguarding public order, are frequently not up to the job because they are understaffed and poorly equipped.
The resulting security gap can only be closed by private security companies.
The protection of endangered personalities in particular as well as that of economic enterprises require excellent qualification of the people employed in the operations.
The security Company "ClockWork" and its former members of special police task forces and the armed services guarantee high standards of training, the confidential execution of contracts and a professional and qualified operation.
I wish the company and its managing director, Mr. Uwe Müller-Sachs, and its staff the success they deserve.

With best wishes to Uwe Müller-Sachs

for his further work in the performance

of his security duties. 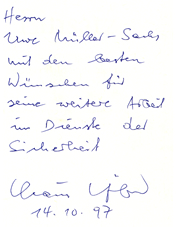 and Founder of the Special Task Force  SEK-Berlin